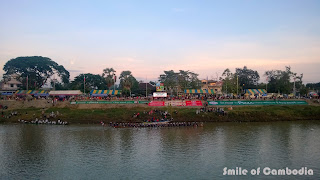 Brief history:
The festival marks a reversal of the flow between the Mekong River and Tonle Sap rivers. because of the number of water deposited throughout the time of year, the Tonle Sap river becomes therefore swollen with water that it reverses the direction of its flow and flows upstream to Tonle Sap lake.

The festival marks the change of the flow back to its normal direction, signifying the end of the season. basically, the festival is a time to offer thanks to the rivers as they supply the region with fertile farming land and lots of fish.

The festival is concentrated on boat races and concerts. The roots of the boat races will be derived back to the days of the Angkorian kings who would train and judge the fighting skills of their water primarily based warriors by holding competitions on the river. These trials successively honored the naval victories of the Khmer empire beneath the leadership of Jayavarman VII within the twelfth century.

Advantages of Pre-Water Festival:
* keep our traditional celebration alive
* to find the best team for the competition in Phnom Penh
* promote tourism (through cultural and traditional celebrations and a lot more)
* exhibition ( buy and sell local products and exported products from neighboring countries with promotions or discounts)
* people are able to enjoy their time with their beloved family or friends or sweetheart.

Where we celebrate: along the Sangker River in the center of Battambang town
When we celebrate: during the full moon days of October usually
How we celebrate: within 3 or 4 days
– in the afternoon we start the boat racing
– In the early evening after boat racing we get the firework the lantern flew to let off the night
– the exhibition starts in the early afternoon too, with food, drinks, clothes, vehicles, electronic devices, services and more)
– there are amusement areas and concerts, so some people would love to dance.
– there will be medium and small boats flowing along the river on the last night of the celebration

Disadvantage: kids get lost if their parents are not careful, heavy traffic, crowded places, and trash are thrown almost everywhere.
It seems like the security is better from year to year.
Locally people love this festival so much.